The hull is ready for launching

Director General, Aleksandr Konovalov opened the meeting with congratulations of Shipyard stuff with new achievements and expressed confidence in Shipyard tomorrow thanks to the experience of its labors.

On the tribune         The launching started

Mr Rutger Adlers, project manager from the company Damen Shipyards Bergum noticed that he saw high level of production and quality which Shipyard stuff showed during the construction of first vessel of such type. The cooperation with Damen began in 2005 from the hulls construction for Multi Cat 1506 and Multi Cat 1908 tugboats. Totally 12 tugboats were delivered to customer in 2005-2006.

Damen Combi Freighter 3850 is difficult ship. This is multipurpose dry-cargo vessel with 3850 tons deadweight  of unlimited  navigation area with the following main characteristics: length overall - 88,60 m, breath overall - 12,50 m, depth amidships - 7,00 m, one-shaft propulsion unit, one cargo hold with two bulkhead for grain and pontoon hatch covers. It has difficult hull design in the bottom and high-quality equipping that is why significant efforts of engineering department were required in part of design documentation development and from production departments in part of providing the proper quality and terms of construction.

The Shipyard began to start steel cutting for this project on May 2007, and already in the beginning of December as it was foreseen in the contract the hull was almost ready for delivery to the customer to the extent of contract specification.

Under the terms of contract for providing of ship stability at sea passing the aft and fore superstructures after installing at place,  presentation to Customer and Classification society have been dismounted  and put into the hold.

The vessel is called by the Owner (Martin Van Der Burg, also a captain of the vessel) as «Tucana» like a constellation.

Delivery –acceptance tests and drawing up of the documents will take several days and even before May Days the vessel will leave the Shipyard to its maiden voyage.

We wish a happy sailing for the ship and wait Damen company for new orders! 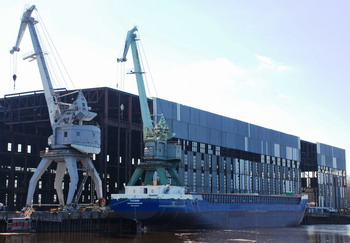