As a part of the major modernization of production, in workshop R-32 of « Nevsky shipbuilding-shiprepair plant, LLC » works on installation of the automated Line for Flat Sections Assembly and Welding of the German company IMG are at the final stage. The cost of the Line is approximately 135 mln. roubles. The Line is intended for production of flat sections from production of panels to assembly of flat sections with framing at the end of the line; then at the next stage of production cycle volumetric section and blocks of ship hulls are formed from produced flat sections. 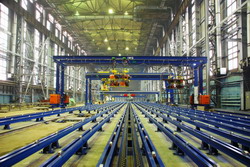 The Line installed by IMG is fully automatic. The overall length of the Line is 160 m. Sections movement is carried out in one direction with performance of operations at certain positions. 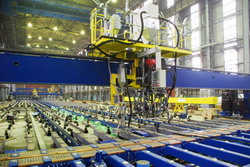 When putting the new Line into operation, the hull-assembling production will take three times less of working hours, the labour productivity will go higher and more vessels will be handed over to the customers. 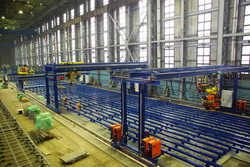 The Line having been installed and two trial sections having been made, the Line is to be put into operation at the end of December of this year.