During 22-25 of September 2009, «Nevsky Shipbuilding - Shiprepair Plant, LLC» («Nevsky Shipyard») was an exhibitor at the 10th anniversary International Exhibition of Shipbuilding, Shipping, Port Operations and Oceanic and Continental Shelf Development «Neva-2009» which took place in Exhibition Center «LenExpo», Saint Petersburg. The number of registered participants who visited the stand of Nevsky Shipyard was not less than 100 persons a day. Besides, a lot of interested visitors also came to the stand. The main topics for discussion were: organization of construction of various objects at the Shipyard facilities, ship-repair works, deliveries of the equipment and materials for shipbuilding and ship repair. At the same time such issue as selection of the personnel and new subcontract organizations was also paid much attention to. 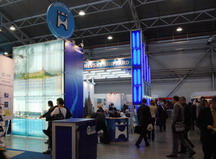 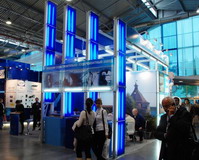 Besides, much intensive work was done at the stand on coordinating and signing of contracts for deliveries of the equipment for a multipurpose salvage vessel of project MPSV07 that is currently under construction at the Shipyard. So the following contracts were signed: contracts with «Fluidmecanica S.A.U.» and «Adria Winch d.o.o.» on delivery of the deck equipment; contract with «Fire Fighting System AS» on delivery of the special fire fighting equipment; with «Alfa Laval Tumba AB» on delivery of  MDO separators and other related equipment - and with «Hoppe Bordmesstechnik GmbH» - on delivery of antiheeling system. 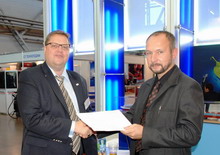 During work of the exhibition the management of the Shipyard had a number of meetings with representatives of JSC «Sovcomflot» regarding the Cooperation Agreement signed in December, 2008. The main point of negotiations was the construction of bunker- tankers. Victor Olersky, the Deputy Minister of Transport of the Russian Federation, took part in one of these meetings. 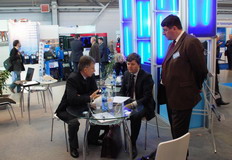 We are very thankful to all our partners for joint fruitful work during the exhibition and we do hope for further beneficial cooperation to the satisfaction of all interested parties.