December, 23-rd, 2009. As a part of the major modernization of production, in workshop R-32 of « Nevsky shipbuilding-shiprepair plant, LLC » there was a start-up and commissioning of the automated Line for Flat Sections Assembly and Welding of the German company IMG as well as related sites which provide the work of the Line: profile and T-section production and micropanel production. 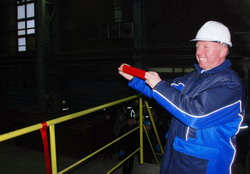 The ceremony of the Line start-up was visited by the invited guests, the representatives of the management and technicians of « Nevsky Shipyard », the official representative of company IMG in Russia with group of the German technicians, who carried out the installation supervision and also training of Line operators from the personnel of the Shipyard. Everybody who was present at the workshop had a chance to see the process of panel production at different stages from ship plate preparation to end product. 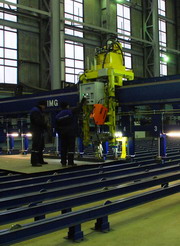 The Line supplied and installed by IMG is fully automatic and intended for production of flat sections from production of panels to assembly of flat sections with framing at the end of the line; then at the next stage of production cycle volumetric section and blocks of ship hulls are formed from produced flat sections. The overall length of the Line is 160 m. Sections movement is carried out in one direction with performance of operations at certain positions.   . 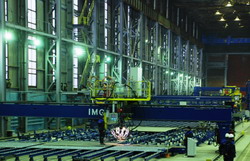 When putting the new Line into operation, the hull-assembling production will take three times less of working hours, the labour productivity will go higher and more vessels will be handed over to the customers. The total cost of the installed equipment is approximately 135 mln. Roubles.

According to the major Plan of Modernization, there are two stages of modernization. Installation and putting into operation of the Line for Flat Sections Assembly and Welding are included into the first stage. The second stage includes construction of section cleaning and painting chamber, purchase of multiwheeler transporter for transportation of structures up to 150 tons and the bending press, as well as the installation of additional crane equipment. The costs on modernization of production within the program will make approximately 440 million rbl.